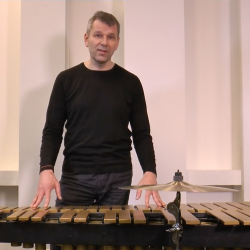 ‘For me, listening to and making music is all about immersing.Warmth and pulse are words that come to mind when I try to describe my music.Voice and text are important for me; I like to follow the route that a text lays out for me.’

Arnold Marinissen likes to write for voices. Working with text, the personality and warmth of each individual voice, the intense dealing with sound, breath, diction and intonation make singing for him a field of special interest. He also likes a lot to write for percussion. His background as a percussionist provides him with knowledge and a clear taste and direction in writing for this multi-coloured family of instruments. However, Marinissen also writes for strings, piano, winds and brass. He created works for tape, music for film, theater and several works for dance performances. A direct contact and exchange with performers inspires Marinissen. Therefore, chamber music, works for ensemble and solo works so far are prominent in his oeuvre. Also the collaboration with stage and film directors, choreographers and light designers is something Marinissen considers valuable. Marinissen composed for a.o. Asko|Schönberg, Nederlands Kamerkoor, Silbersee, Calefax Rietkwintet, Ives Ensemble, Asko Kamerkoor, Prisma Strijktrio, Orgelpark, Club Guy & Roni, for choreographer/dancer Ederson Rodrigues Xavier, and for the Dutch cinema film Bernard. His vocal quintet Von Pferden, Gräsern, Sonnen, Menschen was selected for Toonzetters and was sung by VOCAALLAB in the Holland Festival 2012. Also Exaudi from London has performed this work several times. New work was recently performed by a.o. Slagwerk Den Haag, Silbersee, by the Insomnia Percussion Trio in Taipei/Taiwan, and by the percussion duo Niek KleinJan/Konstantyn Napolov in the NJO Music Summer. In collaboration with the cellist Katharina Gross he creates The Cello Songbook, a set of so far fifty minutes of music for amplified and looped cello, voice and loudspeakers. Marinissen is also active as a conductor of new music and directed a.o. Ensemble musikFabrik, Asko|Schoenberg, Ensemble Zerafin and Lunapark. The record label BVHaast released a series of three solo CDs, which were received to great critical acclaim. For the Muziekgebouw aan ‘t IJ in Amsterdam he programmed the 2012-13 concert season. He is leader of Lunatree.

Fill and submit to get a free sample lesson

Fill and submit to get a free sample lesson